NOW ON DISPLAY AT VILLAGE COURT 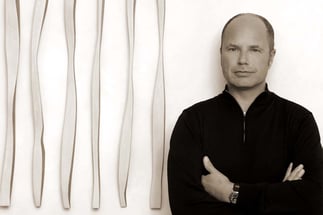 One of the most exclusive communities on the West Coast just commissioned Pascal Pierme to create four major works for their new clubhouse. This comes on the heels of the acquisition of several works and the commission of a major wall piece for the Guy Dreier designed restaurant at the Stone Eagle Golf Club.

Pascal Pierme was born in St. Raphael, France. He lives and works in Santa Fe, New Mexico. Pierme creates minimalist sculptures out of multiple mediums that help him work out puzzles related to balance, movement, inquiry, architecture and nature. The artist cites his grandfather with his fragrant woodshop as an early inspiration. Through him he learned how to be one hundred percent responsible for creating something from A-Z. Pierme studied Art History and Technique in St. Raphael, France and the Airgraph Technique in San Diego, California. He has participated in hundreds of exhibitions throughout the United States, France and Switzerland. His work has been commissioned privately by the likes of Pierre Cardin, Carol Burnett, Marriott Hotels and the Equifax World Headquarters among others. Pierme is interested in assimilating what is not supposed to fit—the combination of contrasting elements through a metaphorical chemistry. He composes elements into a moment and “freezes” it, therefore capturing a split second of evolution.

An exhibition with new works by Pascal Pierme is currently on display at our Village Court gallery. Due to COVID-19 restrictions there is no opening reception, but you are welcome to see the exhibition in person by appointmnet: www.hohmann.art/visit or you can request the a list of available works below.

"Francois Mitterrand said, “I love the person who is searching, yet I am afraid of the one who thinks he has found the answer.” In my life I have much more pleasure with the questions than with finding the answers, except when the answer is a new question. And that is where the obsession to create begins.
My work presents a sweet interrogation versus a statement. Success occurs when the viewer feels involved in the creativity. They ask their own questions that are perhaps different from mine, even if to find the same answer. To me, nothing is more boring than to be in total control.
I am inspired by the verb more than the adjective. I want my work to be recognized by its essence, not by the way it appears. By not being locked in to a “category” I am able to maintain freedom. This allows for a constant evolution in medium and subject.
Much like creating a novel in just a few sentences, I am creating a fundamental alphabet with which to speak my own language. Getting to the essential is the most difficult part for me and for many artists. We often put too much varnish on words, expressions, or attitudes. Through this process my work has become more minimal. Maturity has also given me the ability to take more risks
For decades, balance, movement, inquiry, architecture and nature have been reoccurring themes in my work. I am interested in assimilating what is not supposed to fit - the combining of contrasting elements. My main ingredient is chemistry. I feel the movement and then freeze that moment in the interaction and take a “snapshot” – capturing a split second in the evolution. Thereby creating something that is abstract and at the same time, quite figurative. As such, my work can be experienced as organic. It moves. It is alive, it comes from some-where, it is going somewhere, and you feel that by what you see.
I try to sculpt in a way where I can change my mind until the last minute. My creativity is at its best when I push the medium of my work to its limit. Art, amore', and adventure!"

These are only examples of Pascal Pierme's work. Please request a list of available inventory with the form below.

Please fill out this form and we will send you a list of available inventory right away.

Our inventory changes frequently, which is why we show only examples on this page, many of which have already sold.

We usually have a number of works immediately available and if you are considering one of Pascal Pierme's works for your collection or for a project, please fill out this form and we will send you a list of available works.

If you are already a client/customer of the gallery, you can request access to our complete live inventory where you can see everything that is available with prices.  www.hohmann.art/private

Pascal Pierme is a Frenchman who settled in Santa Fe, New Mexico USA in 1997 after gaining a European reputation as a promising young sculptor. He accomplished several solo exhibitions in France and Switzerland, and worked on collaborative projects alongside creative giants such as Pierre Cardin. Pierme cites his Grandfather – an exceptional woodworker, as well as a painter – as an early inspiration. “The idea to be 100% responsible for creating something from A to Z amazed me.” Pierme recalls. “The scent of his studio was also a big attraction. The fragrance of multiple woods combined with turpentine and linseed oil created a magical space.”

Pierme himself has since become known as a master of medium. However, if asked what he values in art, he will reply, “THE IDEA. That is it.” Though teasingly nicknamed “Picasso” at a very early age, due to rampant creativity, Pierme has never been comfortable identifying himself an artist. That is for others to decide. He is, however, aware that he has prolific creative tendencies. He is a man who does not “feel good” unless he is making.

Hence, the first question this artist explored was his own viability in creating art full-time. The answer came in 1988 after he had given himself one year to become a working artist. Pierme elaborates, “In a way, my career has happened in reverse. In the beginning of my career, choosing to be a sculptor and becoming a young father, happened simultaneously. Being responsible as a father, created an immediate focus and seriousness about my career. In a way, my daughter pushed me to be more professional.”
By 1997, Pascal had moved to Santa Fe, New Mexico permanently. He settled in a home/studio atop a mountain reminiscent of those in the south of France. After a few months he began traveling around in the state, through which he discovered amazing landscape, peace and inspiration. Pierme reminisces, “The magic of New Mexico was a life changing experience for me. I fell in love.”

Pierme considered being a foreigner an advantage for his creative process. He quickly discovered a different system, culture and new approaches - opening a new chapter in the young sculptor’s life. Now, nearly a quarter-century later, his career has blossomed in America. Through apparent maturity in his work, he has been able to take more risks and evolve rapidly. Critics, curators, collectors and artists alike revere his ongoing bodies of work.

Pierme’s work has been included in 80+ solo, museum and international exhibitions out of the 120+ exhibitions outlined on his resume and countless publications have featured his sculpture. In addition, Pierme has found charitable endeavors an important facet in his artistic career. With a true intention of giving back, he has worked as an organizer and benefactor for several organizations relating to the promotion of the arts and the betterment of the community that he calls home.