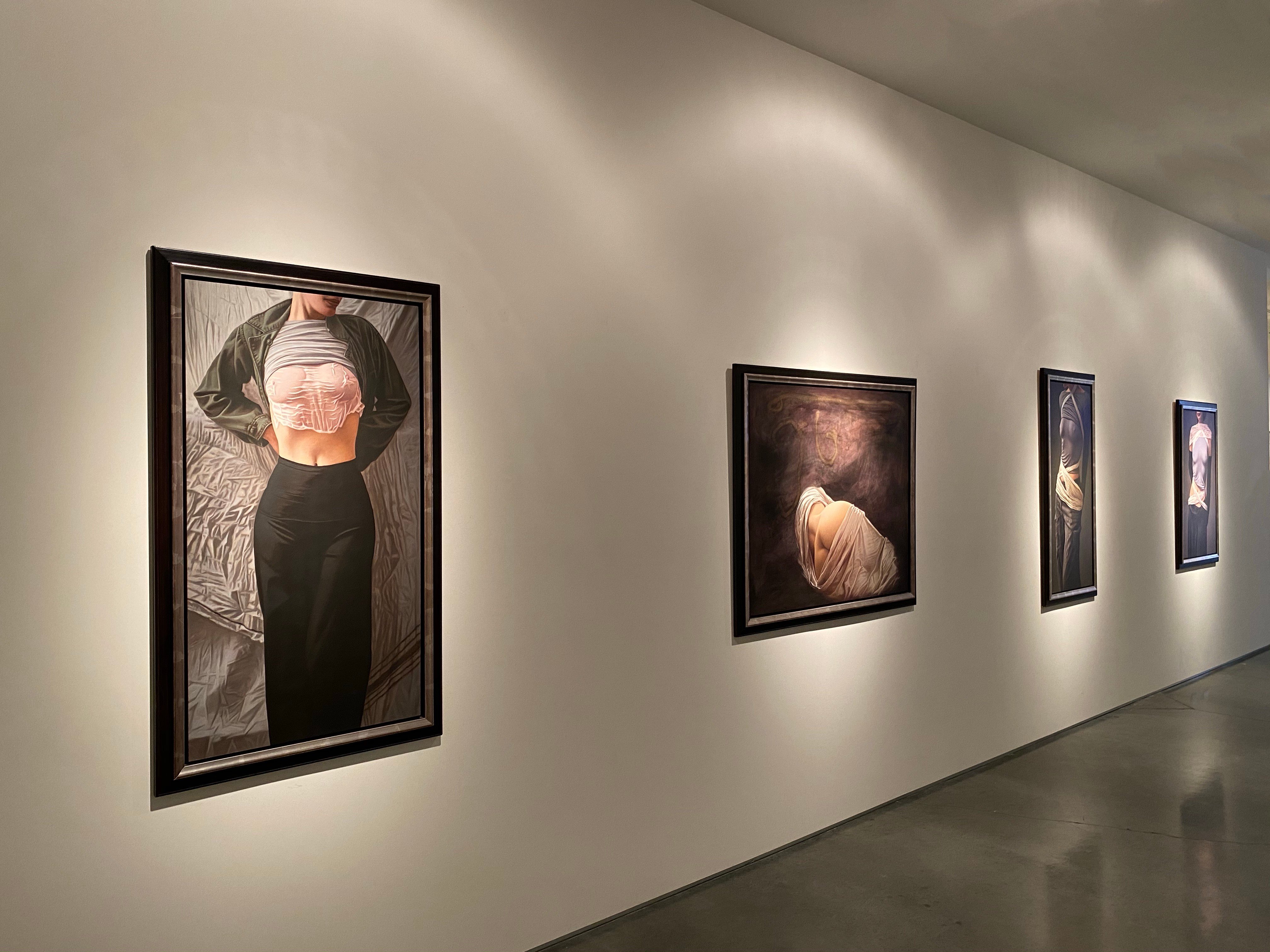 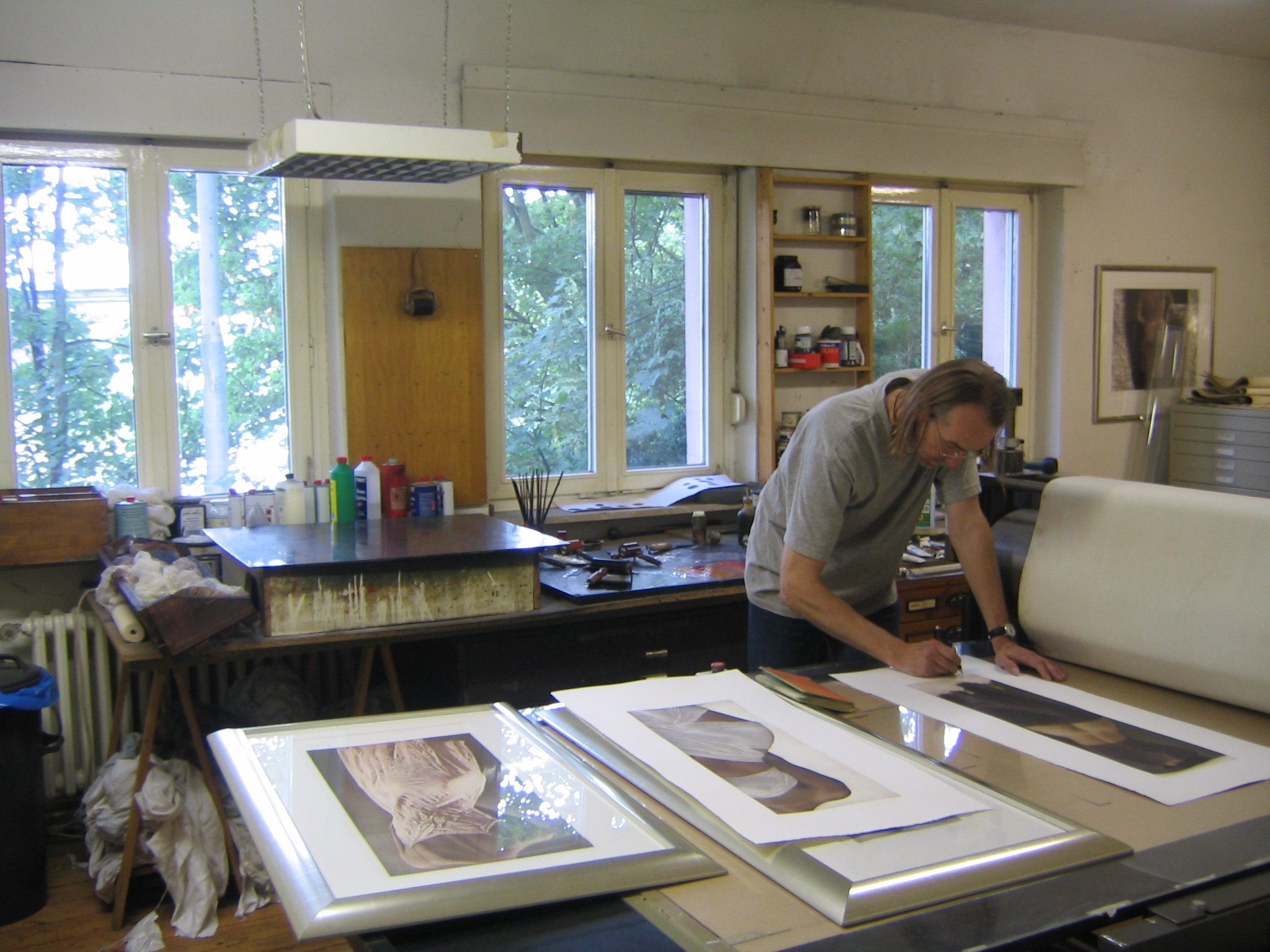 Willi Kissmer was born on December 24th 1951 in Duisburg, Germany where he passed away on July 27th 2018. Kissmer was known for technically exquisite etchings, oil and acrylic paintings that mostly depict nudes or half nudes, which are oftentimes draped in swaths of lush fabric. The details are accentuated in ultra-realistic texture using a combination of mezzotint, dry point and aquatint, which highlight the juxtaposition between flesh and cloth. Finding inspiration in his immediate surroundings, Kissmer’s model was usually his wife. Presented as a subject of eroticism and detailed study, he articulates our communal relationship with objects of desire. After his studies at the renowned Folkwang art school, Kissmer made a name for himself both as a musician and an artist. After numerous educational trips to Russia, Egypt, South America, Greece, Italy and Turkey he taught printmaking at the University of Duisburg. He has had numerous exhibitions in the United States and England. In his work, the artist preferred the torso. He consciously omitted the representation of the head, abstains from individual facial features, and the rendition of hands, the gestures of which could impair the composition and thus the statement. The omission of individuality as well as psyche, the concentration on universal anonymity, and the emphasis on the body indicate Kissmer’s actual concern to deliver symbols of elementary human life, which find beautiful expression in the blooming female body.

Willi Kissmer’s etchings, which mostly depict nudes or half nudes, are oftentimes draped in swaths of lush fabric. The details of which are accentuated in ultra-realistic texture, crease and form brought forth through his signature techniques that combine mezzotint, dry point and aquatint. Beside these graphic prints, Kissmer produces technically exquisite paintings in oil or acrylic. Instead of working on a structured canvas, he paints on paper-mounted plywood. Its smooth surface permits the reproduction of the finest details highlighting the juxtaposition between flesh and cloth. As seen in both “Standing With Pink Top” and “Sitting Woman With Pink Top”, this contrast presents the beautiful body of a woman against the ensuing folds and wrinkles created in her top – a moment of friction as electric as the visage of the human form. Finding inspiration in his immediate surroundings, his model is usually his wife. Presented as a subject of eroticism and detailed study, he articulates our communal relationship with objects of desire. In his pictures, the artist prefers the torso. He consciously omits the representation of the head, abstains from individual facial features, and often also from the rendition of hands, the gestures of which could impair the composition and thus the statement. The omission of individuality as well as psyche, the concentration on universal anonymity, and the emphasis on the body indicate Kissmer’s actual concern, i.e. to deliver symbols of elementary human life, which find their most beautiful expression in the blooming female body. The artist employs combinations of etching, aquatint, drypoint and mezzotint techniques on his copperplates. A range of warm tones and the talent to bring an electrifying edge to his subject, in part, links Kissmer’s art to a long tradition of realism in northern European painting. Willi Kissmer’s expressive and exaggerated interpretation of detail is a trait that permeates the body of his art that has been described as sensual, provocative, technical and mysterious. His works are not conventionally pretty but compelling – confrontational. Willi Kissmer’s studio and residence is in an old industrial tower in southwest Germany. Although his trips have taken him all over Europe, Asia, and the United States, his subjects are always close at hand. “Everything comes out of my personal living environment. That is a result of my laziness. I look around enough to find something that is worth representing.” Consequently, his wife became his ultimate model. The foundation of Kissmer’s art is in his passion for the still life. These elements can include combinations of the female figure, everyday objects and residential architecture.

Kissmer is most interested in relating the qualities of light and its effects upon objects- especially the folds and creases of fabrics and drapery. In his new book it says: ‘...[Willi Kissmer] is much more interested in the partially clothed female than in the complete nude. The full nude for him is not demanding enough. For Kissmer it is the combination of flesh and fabric that form the core of his aesthetic...Within the fold of fabric the force of gravity becomes visible: a force at once real and imaginative, full of poetic possibility.’ Even though the nude female body has been subject for art for many hundreds of years, Willi Kissmer has been able to find his very own unique style that makes him so recognizable and has laid the foundation for his worldwide fame and success.

We have a substantial number of works immediately available, however our inventory changes frequently, so here are some examples of noteworthy works.  If you would like to know what we have in the gallery, please start the dialogue using the form below.

If you are already a client of the gallery, we would be happy to give you an access code to our live inventory where you can see everything that is available with prices. Please note that access is currently restricted to existing customers and collectors of the gallery.

If you are looking for information to evaluate a work that you own, please check the FAQ section about appraisals first. We appreciate it!

If you are already a client of the gallery, please use the form to request a password to log into our live inventory. If you are not a client yet, please use this form to start a dialogue with us, so we can send you a tailored response. We would love to know about your interest and if you are not certain, we are always available by phone as well.

Please give us as much information about what you are looking for in terms of size, topic, and budget so we can narrow down the search. We do not send out entire price lists for any artist. You could say something like " I am looking for an abstract, no larger than 48" x 48". Don't want to spend more than $10,000. You could also say "I like the work! Please call me to discuss."