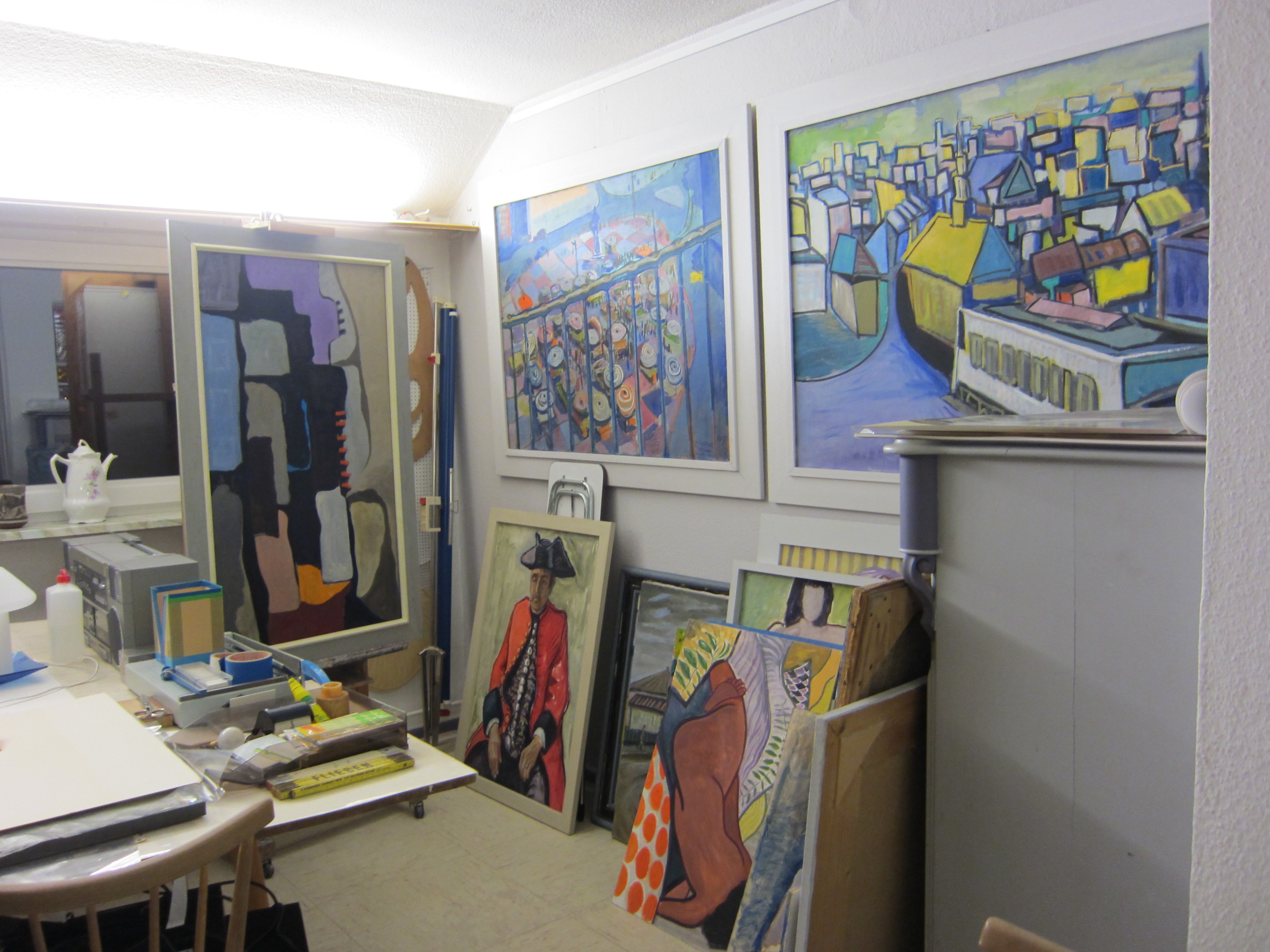 Clemens Kindling, 1916 - 1992 Kindling, who grew up in the town of Halle, on the river Saale, received his artistic training at the local Burg Giebichenstein Art Academy, which had a strong Bauhaus orientation, in the classes for painting and calligraphy. Personal contacts and artistic influences from Dessau’s Bauhaus are unmistakable in Kindling’s work. A “glimmer of Feininger” shines through wherever his works are characterized by cubist and linear elements, in a highly individualized way. A scholarship enabled Kindling to further his studies at the Unified State Schools for Free and Applied Arts in Berlin Charlottenburg. Kindling’s army service from 1939 to 1945 did not mean an interruption of his work. Thanks to a special authorization he was allowed to paint whenever he could. Thus, in the years 1942/43, looking at people and places with the eyes not of a soldier but of an artist, he created his works “People of Russia.” The artist’s last, most intensive creative period was in the years 1990/91. He returned from three trips to Italy with sketchbooks chock-full of images. The final yield from these trips was over 80 pictures, mostly pastels. Unfortunately, many more, particularly oils, remained unfinished as the artist passed away on March 10, 1992. Kindling’s preferred stylistic features were lively colorfulness and color contrasts. In addition, the play of light and shadow, light and dark gives many of his pictures a very special charm. The artist enjoyed painting pensive views of cities as much as he did landscapes, portraits, or nudes.

We have a substantial number of works immediately available, however our inventory changes frequently, so here are some examples of noteworthy works.  If you would like to know what we have in the gallery, please start the dialogue using the form below.

If you are already a client of the gallery, we would be happy to give you an access code to our live inventory where you can see everything that is available with prices. Please note that access is currently restricted to existing customers and collectors of the gallery.

If you are looking for information to evaluate a work that you own, please check the FAQ section about appraisals first. We appreciate it!

All of Clemens Kindling’s works featured in our inventory are original, one-of-a-kind paintings and works on paper.

If you are already a client of the gallery, please use the form to request a password to log into our live inventory. If you are not a client yet, please use this form to start a dialogue with us, so we can send you a tailored response. We would love to know about your interest and if you are not certain, we are always available by phone as well.
Please give us as much information about what you are looking for in terms of size, topic, and budget so we can narrow down the search. We do not send out entire price lists for any artist.

Born in 1916, Clemens Kindling’s fierce impetus to paint at all costs began in the town of Halle along the river Salle where he grew up compelled to capture the faces and landscapes around him. The youngest of eight children with a missionary father, he was encouraged early to become a priest. But when his father passed away, his mother, who fostered his inherent talent, allowed him to attend the local Burg Giebichenstein Art Academy. At the time, the school was rich with the burgeoning Bauhaus influence and considered one of the most important centers for early German Expressionist exploration. With professors who were themselves students of such masters as Renoir and Cezanne, Kindling developed from this deep historical influence that integrated with his own distinctive voice and carried throughout his pursuant life’s work. His style was composed of an organic and lively view of people and objects absent of rigid straight lines and filled with uneven compositions. Unlikely hues skewed reality while trademarks of the era’s new forays into expressionism were seen through color fields surrounded in black and other pivotal signatures. From here, Kindling received a scholarship to the Unified State Schools for Free and Applied Arts in Berlin in 1929. Halfway through his schooling, Hitler’s regime stepped in to abort the creativity being expressed in new and progressive ways in the art world. Most of Kindling’s professors were banished from their posts and he resorted to studying with them in private until, like every young German male he was drafted into the Army. The course of Kindling’s life would be forever changed from a free and effusive artist to a man struggling to create within the confining circumstances thrust upon him. In the Army as a major war was being planned, while others were grasping at any modicum of sleep they could obtain, Kindling was given the freedom to spend time painting. His superiors recognized the compulsion of this man who simply could not live or thrive without the liberties of expression. During wartime, while immersed in the societal and political hatred consciousness against Russia, Kindling spent his time stationed there capturing the faces and environment with a profound tenderness. Seeing life not through a soldier’s eyes but through the rose-colored lens of humanity, he created a series that eventually became an important and thoughtful backward glance called “People of Russia.” After the war, Kindling returned to Halle where he encountered his happiest years, meeting his wife Maria and living as an artist. Even though it was a time of recovery for the people, he was able to maintain his career with a little help from the government, which paid for his studio and materials. This period was short lived though as there was great pressure on artists to depict a style of social realism that showed the working class as heroes; a forced subject that Kindling struggled against greatly. He simply wanted to show the world through his own eyes, not the view from a propagandistic angle. HOHMANN www.hohmannfineart.com As his resistance grew his portraits instead articulated the common man as a haggard breed. Faced with an impending trial to strip him of his rights as an artist, Kindling fled the city at night with his wife, a canvas in progress strapped across his body. They landed in Dorfmark where they remained throughout the 1950s and bore a daughter. Life was harsh for the artist during this time and in order to support his family he took a real nine to five job that lasted the next 22 years. Although he was widely respected, his art career suffered, going underground as the realities of responsibility and making ends meet took hold. It was only upon his retirement that the artist bloomed again, rekindling the early passion to observe his surroundings through color and form. A body of work exploded as a mirror of all that enveloped him including studies of his wife, life and friends as well as the landmarks of his existence from a sawmill near his home to the cities he encountered on travels to places such as Switzerland. A revived maelstrom of work started to build itself back up again and when he was discovered by the Hohmann family in the 1970s, his vast body of pastel sketches portrayed the poignant fire of an artist whose drive to create inevitably could not be dampened by struggle nor circumstance. A fruitful time began for the artist that although late in life, was dotted with many exhibitions that culminated in collectors across the nation. Finally getting his due, Kindling was hard at work on a new series of his travels through Italy when he unexpectedly passed away at 76 in 1992. Now recognized as a true and prolific master, with a drive that could not be snuffed by the unfortunate twists of existence, Kindling’s legacy continues carrying the mark of an authentic and unflinching artist.